This is my last part on this chapter since Sky had resuming at this arc again, I'm gonna return to chapter 29.

Please keep in mind that you will read a spoilers from now on, it your own risk for read it.

And thanks for read it so far, as well as the people who leave a suggestion to improve it.


At the center street of imperial city, Kankanen.

Many people are bustling crowd to come and go.

The sound of high-pitched bell resonate ringing in the ears.

Its origin, due to 1 cavalry soldiers  advancing while the bell was ringing.

If you hear that noisy sound, the people who was flood on the main street will be quickly avoid it and started to leave the road.

The earlier horseman is a herald which tell that soon, a silhouette knights will be entering the imperial city.

For  the sake of silhouette knight which is a giant weapons with all 10 meters height able to walk in,

There was require a sufficient width for that purpose, just exactly like this center street.

The resident too, also interest in what soldier are using at the same time.

In order for let it enter the city, a herald will be use in this way.

By the way, to use the central street,

It will display an appearance of silhouette knights to the people,

There often have a distance between a herald soldiers, to display figure of centaur silhouette knights, Tzendrinble

It did not entering the imperial city with weapon armed,

The centaur knights which posses a the body that larger than an ordinary silhouette knights has a heavy walking step.

The residents of imperial city saw it off by waving their hand.

Thru large street, the Tzendrinble arrived at royal castle Shreiber,

The newly centaur knights had been guided into parking place as it entering the royal castle.

When it taken to a parking place that large enough for the machine,

The knight runners exit from the machine.

2 people had come down, they were Eru & Ady.

[Finally, we reach the castle at last!!]

[Yes, good work-desu. but Ady, since I'm too, was the one who able to ride the Tzendrinble, it would turn out fine any way with out any different if I was the one who rides it.]

[That's no good, because this is mine Tzen-chan, I won't let anyone burrow it even Eru-kun.]

[To say such a thing, in fact, you just want to skip the training with the 3th squadron isn't?]

At Ady appearance which her blatantly eyes swaying,

[I will allow it just this time only, k?. because you gonna need an obviously luck for next times since tomorrow-ne]

While pulling Ady who happily hugged him,

Eru headed to the castle.

Eru groups had been guided to a separate location from between the audience area after they entered the royal castle.

Rather than he was calling by Riothamus,

It was the previous king, Ambrosius who called him.

The arrived Eru and Ady have bow down and sit on the seat.

A shadow shines from their overhead.

When they were raise up their neck,

They were confronted with a tall man who was before them, the one with a couples of strong arm in a daunting pose.

Although the man body filled with a vigorous muscularity which give a frightening feeling,

A rough person with a properly spring hairs give the impressions of the lion.

Eru suddenly looks at the man eyes in front of  him and Ambrosius then he sit, a preparation feelings filled the room.

[...So you're the Silver phoenix knights grand-master, Ernesti Echevarria? Although I've heard a rumors beforehand, You're really small!]

[Eh, k, It is as you said-gozaimasu, "His royal highness Emurys"]

Indeed, This person was the current Fremmevir kingdom 2nd prince, Emurys Geijer Fremmevir with a pleasant smiling on his face.

From the shorty Eru view points,

It thinkable that he viewed Emurys as a very tall person far from just look up big,

There was no longer need to look at opposite elevation.

Also, Ambrosius who made a wry smiles can be seen.

[Emurys!, go sit on the side for a moment. The story is as you heard.]

When the eldest son, Riothamus ascend to be the current king, his sons (Ambrosius grandsons) will become the crown prince.

In other word, He is the 2nd child of Riothamus, Emurys,

The one who will succeed the throne from the kings.

But he just, lived in this country only a little 1 month.

[I heard that his royal highness had been studying abroad in Kshyperuk kingdom and, returned not too long ago-ne.]

[Now that my fathers take over the throne, I've no choice but return to the home town.]

Eru too, has overheard the news about his returned from studying in foreign countries.

There were a various circumstances related to the throne so,

There was no opportunity to meet him,

This is their first meeting.

[However I, heard news about the finished silhouette knight after leaving a little country!(Kshyperuk, maybe..) also the new mass production machines, Karrdetolle was it!? It really wonderful! I also want a slightly move of strong and delicate one, Indeed, as expected from our knights country!]

[Right, right, thru the humble effort of my Silver phoenix knights order and the people of LAB(NTR), It is a master piece!]

Hit the back-channel feed back at the delicately proudly appearance of Eru, Emurys slap his knee.

[That's it. speaking of new, there was also that horse beetle too right? I'm curious, I'm interest in it, you know? Lend it to me now,  I want to ran out far in it.]

[Eeehhh!? um, er, ah, You talking about Tzen-chan right? that one, It would be easier to said not to lent it because it is very difficult to ride]

[I will manage it somehow, because it will be like ride a wild horse, in short word.!]

[It did not share the same principle as a real horse, not something that you get over it with only a will power.....]

Ambrosius did not participate in this actively conversation,

From earlier, Emurys is the only one who take part in it.

It is never wrong to watching warm at the grandson,

Which it is like watching Eru reaction against the full momentum Emurys.

In a strange direction,

While at the end of it sight,

Eru act appropriately match according to the story of  Emurys,

Ady stand her ground to not give up on Tzendrinble though she was afraid.

[That is for now, I've heard that I was called to meet with you today for do something]

At the suitable time that he looking for, Eru round up the story.

He left Emurys because the talking was likely to be a forever.

[Ops, you're right, the reason for calling you today was no other than, ...I think to ask you to build one silhouette knight for me.]

At the Ambrosius word that finally get into the main topic,

[But, Your majesty already have the great knights, "Raids Of Valor" isn't?]

[It is difference, There can be only one "King Cavalry". therefore it is for the king. now, I gave it to Riothamus, it's regrettable that we did not bring it up on our own. So, to prepare a new one, I thought it would be better if you're the one who made it.]

Ambrosius muttered, it appear that his retirement life was too much boring.

Eru don't know how to response it and he is temped to ask him,

He was already discouraged.

[We had acknowledge this, we will put an effort into this matter.]

[In the same time, make one for me too! Grandpa is surely the cunning one.] (not fair isn'it? :D)

[It's my pleasure, either one or two will be not a problem. So, which kind of machine that you desire? Although, I will build it for you while comply your preference as much as possible]

Before Ambrosius words come out off his opened mouth, Emurys had took the initiatives.

He stand up vigorously from his chair.

[Correct, and the first priority trait is a "Power".]

And,  that's what he told with all his strength,

Eru take out a pen, an ink bottle and a small notes from his pouch that attached to his waist.

It is a portable set which made in order to allow him note any idea at anywhere.

While he was writing with a pen which made a karikari sound,

Emurys too, laid the next one with a prominent actions.

Yet Eru still continue to take memo while nodding with his serious behavior.

However, this time Eru was only writing a word, "Muscle Brain" in a big way on his notepad.

He ask a question while flip a page of notepad.

[Ok, if you have nothing to add more, I've found it very very very interesting. ah, do you have more order that similar to last one?]

[Let see.....it strange....there's one, I want it to resemble a lion like the one grandpa used to have, made it look a very powerful one!!]

Eru drawn a flower circle around "Muscle Brian" word on his memo. (はなまる or it may be this "*")

Beside a double circles, It was really overflowing with a word of strength.

[I will entrust this matter to you, well, as long as there is no unforeseen happens, you may be end up like it.]

[We've receive your command, we will display a preparation for the personal machine befit the previous king majesty and his royal highness.]

Even Ady who had been hearing the whole thing, and had a thought of [Which part of it that was not a big deal?] and almost protest this,

It was Eru smiling with his ease when he response to the order with overflowing joyful that stop her.

In the end, there were 2 unit of this silhouette knights, for Ambrosius and Emurys, I wonder about what the old king will use it for. 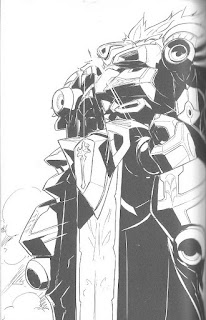 PS.
1. I begin to like Emurys since he is the opposite of Eru, a kind of character that smash any logic with his brute strength.
2. Have you guys notice the introduction of the Elven race in this chapter?